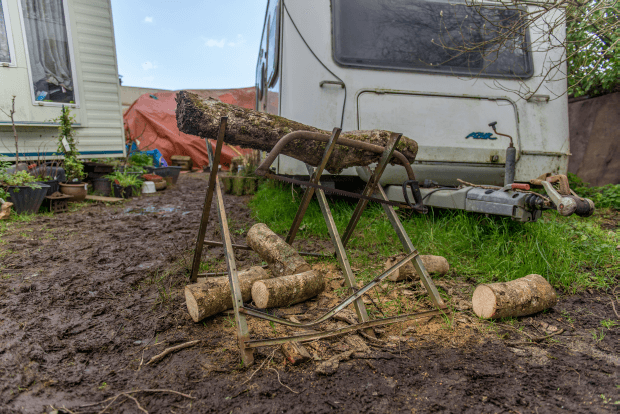 “When I went to Stone Henge in 1984 I was so impressed with the fact that you could live in a bus or a trailer that I just badly wanted to have a bus. It was the freedom and sense of community that I was particularly looking for.” “As Travellers, you’d quite often be miles way from a hospital, you couldn’t get on a doctors surgery list being no fixed abode, so we very often self-medicated. That’s how I started to get interested. Things like Slippery Elm and Goldenseal were the first herbs I started to use.”

Mum, you’ve obviously been travelling for a very long time. What first influenced you to start travelling?

When I went to Stone Henge in 1984 I was so impressed with the fact that you could live in a bus or a trailer that I just badly wanted to have a bus. It was the freedom and sense of community that I was particularly looking for.

36 sec. Through your Travelling history, is there a particularly time that you would choose to go back to?

I’d love to go back to the beginning, because it was just so much fun. Even though it was in the total wake of the Bean Field which was horrific for the people who were there, I wasn’t there but I travelled with a lot of people who were.

1 min 13 seconds In your experience, how has the Travelling culture changed.

It was really quite easy, there was lots of common land, green lanes, groves, and traditional park-ups.  But in the 90s they all got sealed up.  90% plus got sealed up by Margaret Thatcher’s gov, we had nowhere to go to.

1min 48 sec. You mention things that we can’t do now, would you choose to travel if you grew up in the modern day?

Yes, even more so, it would make me want to do it even more

2 min 4 sec. What is it that would encourage you to do so?

It’s the oppression and the puerility of it. It really appeals to me. Although I do have to point out that I do like the queen for other reasons, which makes me a pretty rubbish anarchist. I’ve got fond memories of sitting wtih my grandmother watching changing of the gaurd, but the pure anarchy of it.

2 min 36 sec If you had the choice would you do it all again?

I would. I would do it better, with the benefit of hindsight, I’d have more fun and I don’t think I’d have given my bus away.

2 min 58 sec Obviously there was a point when you had a baby on the road, was there a great difference within your life when that happened?

When Lolly came along, that was massive. I had to go from being a crazy anarchist to a mummy. which was qutie a massive step for me, obviously it was worth it and i wouldn’t change it

3 min 37 Did you find it hard to raise your children at the start?

It was difficult, going to get water and wood, before mobile phones, it was tough. Lolly was in terry towelling nappies for the first 6 months of her life, and i hand washed those out on site, in a bucket, with water that i’d collected from the local garage or whatever, so it was difficult. The whole day was filled with the lifestyle.

Do you think that growing up with our lifestyle made it easier to teach your children certain life lessons and morals?

Absolutely. I thknk you are all very well balanced, well grounded , well rounded human beings, because you understand that not everything is the flick of a switch, you have to put te effort in, and it made you grow up with decent morals and respect for wildlife. I think it was excellent for you.

4 min 48 sec. So, you’ve lived in many places now, would you say that Cornwall is your favourite place to live?

It certainly is, we’ve been so long. It’s the easy going attitute, the upcountry ideas are starting to flow down. We used to travel around the home counties and that was hard work. We were squaring up the with authorities over that way, down here it’s much more chilled out and relaxed. I’d say Cornwall for it’s beautiful scenary, fabulous beaches and the folk that live down this way.

5 min 38 sec. As a herbalist you have been approached in many different situations where herbs can help. Are there any situations inparticular that spring to mind?

One guy, who’s girlfriend came to me, was on the list for surgery, he had an infection in his lung double pneumonia and he was going to have to have it surgically removed, he was in intensive care waiting for the operation. She asked me what would I do, so I suggested a couple of herbs to her, goldenseal and enchinacea. She gave them to him, and she believes that is the reason why he came out of intensive care, came off the critical list and didnt’ need to go for his operation. That and the fact that there’s been a lot of ladies who were threatening miscarriage, and they would come to me, and i would help them and they wnet on to go full term with their babies. Those are the things that stick out, that make it worth doing. I want to get that infomration out there, to rekindle the knowledge, we all had it, at one point, not that long again.

7 min 11 sec Why did you want to become a herbalist in the first place?

As Travellers, you’d quite often be miles way from a hospital, you couldn’t get on a doctors surgery list being no fixed abode, so we very often self-medicated. That’s how I started to get interestd. Things like Slippery Elm and Goldenseal were the first herbs I started to use. And the dogs as well, as you couldn’t get the vetinary surgery and it was too expensive.

8 min 11sec. Do you wish you’d done a different profession to herbal medicine?

8 min 22sec. Living on the road can draw negative incidents, are there any where you felt particularly threatened?

We were at a place called Ford Lane, near Paddock Wood, and 3 caravans, suddenly aware that there were landrovers outside, and then we could hear guns being shot. Some people came down, and they were drunk with 12 bore shotguns, taking pot shots around the site. I had a washing line out between my trailer and my neighbours trailer, and in the morning we could see all of the gunshot through the t-shirt haging on the line. They created a lot of commotion, and the people up the road called the police. By the time the police turned up, they had gone, I said, what if I’d been wearing that t-shirt, they’d have murdered me, and she said no, it was probably just manslaughter. They came back again, they were intimidating us. They had the permission of the landowner, but the second time they police were waiting. They’d shot a rabbit, and tried to cook it on a fire they started with diesel or something, The police came, but couldn’t do anything. The shooters said they’d come to shoot ‘vermin’, but the undertone was that we were targets. Apparently being drunk in charge of a firearm isn’t arrestable.

Another time when Lolly was 6 months, all the men were out and I was feeding her a banana. A man came to the door and said “you need to get all your caravans out of here, off of here by this evening otherwise we’re bringing the Irish in and they’re gonna torch you out.” Obviously I was feeling quite vulnerable there. I finished feeding Lolly the mashed banana, I was so angry. I went up to him and I said “Don’t you ever threaten to murder my daughter and I, how dare you.” You want to be careful mate, you’ve got a lot more to lose, and you’re a lot easier to find than any of us lot, so you be careful about who you go threatening to murder, how dare you!

I could tell you so many stories along those lines. But I can also tell you, when the chips are down and it’s all going wrong, it’s when folks show you kindness. The last eviction from Coverack, the Gypsy ladies from St Day said come and pull on with us Sal, come to our site, if you’ve got no-where to go, come and pull on. You’ve got cross-community support. These guys were more than happy to welcome us in their hour of need, it puts your faith back in human nature.

The shooters said they’d come down to shoot vermin, apparently rabbits are vermin, but the undertone there. as you can plainly see, was that we were actually what they were trying to intimidate.

It was the freedom and sense of community that I was particularly looking for.

As Travellers, you’d quite often be miles way from a hospital, you couldn’t get on a doctors surgery list being no fixed abode, so we very often self-medicated. That’s how I started to get interested. Things like Slippery Elm and Goldenseal were the first herbs I started to use.