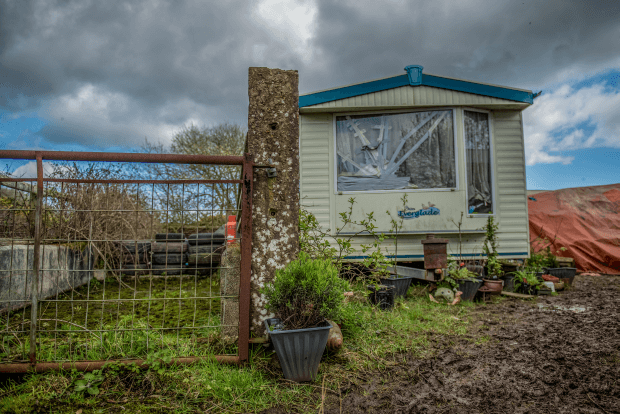 ” It’s interesting because you have to be an expert in law, almost, to travel and be very tenacious, and be able to have an enquiring and challenging mind and a lot of courage to do it too.”
“This is everything we’ve got. We don’t have a council house upcountry we can bail off to, we can’t go back to Grannies, bless her, she ain’t there. We can’t go back home and stop playing around, or whatever, this is our home, this is our lifestyle, this is our way of life and we have actively selected towards doing it. “

How have evictions changed over the years since you started travelling?

Legislation changed, it seems far more difficult to actually travel. Evictions would be lots and lots of us getting moved on, enmass, at the drop of the hat, back in the 80s around the Stonehenge time. There would be many evictions where we would be evicted in the morning, made to travel on for miles and miles and miles, only to end the day back near where we had started. The same thing would happen the next day.

As times went by, people stayed in big groups for safety and for community. The Beanfield, where everyone got trashed in 1985, under Margaret Thatcher, on their way to Stonehenge created a lot of fear in the Travelling community.

For example when your brother Ollie was born at Crowborough in ’95 we were under threat of eviction under the Criminal Justice act. Wealden district council hadn’t done the proper social, welfare, health checks, so we challenged the eviction. When it finally went to court at the Strand, the justice decided that we should be allowed to stay, that the district council hadn’t checked any individual circumstances, There was me pregnant with Ollie. There was a young girl called Chelsea with a prematurely fused skull and was awaiting an operation at Guy’s hospital and would need a year’s aftercare. Tina Stratford had a new born Lottie Stratford. Tracey Whales and Tina took the challenge to court using the Public Law Project under Ravi Low-Beer, and won the quashing of the eviction. We ended up staying there for a long time. But you have to almost be an expert in law and very tenacious, have an enquiring and challenging mind and a lot of courage.

They actually read the 1894 Dept of the environment circular which says that they had to do the welfare checks.

When we left Crowborough I was pregnant with you, and we went to Patcham, Braypool Lane, Brighton. You were born there, and there was an eviction carried out when you were a few months old.

They wanted to create a proper traveller site at Patcham, but to do so they had to disperse everyone from around there. We ended up at Stanmer park, a beautiful park. Others ended up at Hangleton near Shoreham, which looked more like a concentration camp, it was just concrete and huge metal fencing. The eviction was quite harassing and offence. We’ve got the Scammell explorer, and there were lots of vehicles stuck in the mud there. You were tiny, I was still breastfeeding you, and your siblings were 3 and 6. I and Dennis, your Dad, pulled a lot of vehicles out of there that were stuck.

On the day of the eviction I went out in the landy (Landrover) to get diesel to put in the Scammell, but when I got back they wouldn’t let me in. I was arguing with this guy, and they sent me on a wild goose chase around the site talking to different guys. I was getting pretty upset. Anything that left wasn’t getting back on, but it wasn’t helpful. It felt like we were being terrorised and it was chaos, and there were a lot of vulnerable people. We ended up leaving Brighton. I think they did develop the site, but just a few chippings and a toilet block, not what people wanted.

11 min, 05. I don’t think they know much about what people want. People mainly want to be left alone.

We ended up, later that same year, on Crown Point, between Crowborough and Seven Oaks. We’d been parked on this lay-by for a while. We got an eviction order and I got in touch with Luke Clements a human rights lawyer, who agreed to take on the eviction. One morning, without warning the police turned up to evict. I was outside, speaking to the officer who was present.

12 min 50 seconds Ellwood : Could they do that back then? Just turn up and try to evict you?

Sal: I’ll go back to Crown Point, but when we were at Sandringham road in Tunbridge wells, when Lolly was a baby. The police were armed with guns, 1992, and we were forced off that morning, we’d only been there a few hours. We were exhausted, we’d been up all night from the previous days eviction.

That was the prequel to Crown Point.

Crown Point was disgusting as Steve Monday had been in a head-on collision with an articulated lorry, outside site. He was in hospital in London fighting for his life. His young family, Helen and the kids. Steve’s son from a previous relationship had just come to the family, and they had a baby called Pebble. You were a baby, Ollie and Lolly were small. There were other babies on site, and lots of children at school. Jo’s partner Steph was working on the hop machines, the farmer told him to take down the guard to feed the hops into the machine and his hand got caught and the skin was shredded. He had so many operations to reconstruct his hand. With all this, they came down without warning. I argued with the police office from 7am to noon. I said we were challenging the conviction. Luke said to the office that he would advice us to move to just outside the red area. On an eviction there is always a map with a red line, showing where you are being evicted from, and there is always an area outside that. Crown point is just a lay-by, it was closed off at one end so we weren’t obstructing a highway or anything. A few moments after talking to Luke Clements on the phone to officer stood up and ordered the full clearing of the lane. The bailiffs that were with the police were like rottweilers, trying to get people arrest. They seemed like meatheads, they wanted a row, they wanted a fight. That was pretty shocking. We ended up in Oxted, on a lay-by there, and got evicted a lot around that time. We were hounded out of the county of Kent. They moved us from that lay-by, to one in Surrey.

They got us out of the county!

I’m trying to remember the name of the Kent Gypsy liaison officer, Phil Forrester who at that time was in a lay-by further down the road. He had broken his leg or something, and he was in charge of the eviction, but didn’t have the decency to come. He has written a book as well, I thought he was sympathetic to travellers, but by the end of this I had a very low opinion of him.

21 min When we were at Dolly’s Cross, nr Coverack, I went with Jenny to a conference about Travellers, connected to Caroline Dann of TravellerSpace. Phil Forrester was there. I asked if he regretted his decision to evict a young family with a father in hospital, but he never responded.

That was a horrific eviction. Oxted was horrific on some levels. Some dogs went missing, including Sid, our dog, and Fritz, Johnny’s dog. It was bonfire night. When Sid came back he was exhausted, it looked like he’d been hog-tied, and he lay on his bed for 3 days and did not move. I thought he was dying. I think they’d been taken, tied and beaten and Fritz didn’t make it.

After that we ended up at a Bramshill Forest, where I travelled around when I first started travelling. Then we got to Basingstoke, then we moved to Cornwall.

We were based in Cornwall but then we went back up to the home counties, and I remember we were evicted 8 times that year. The longest we spent on any site was 8 weeks. Then we decided to settled in Cornwall.

Dolly’s cross was like a dormitory site for a flower farm. Scrimshaws daffodil farm. A lot of pickers stayed there and we went because we knew there were Travellers too. That was a Private eviction, by the private landowner. Most evictions are from the councils.

The most recent one was Coverack car park, and that was like nothing else on this year, because we’d been there when it was Kerrier District Council land, which dissolved into a Unitary Council, then after 3 years they leased it to the Parish Council, who were the ones who evicted. We’d been there for so long, we’d managed to get the Certificate of Lawful use as a Caravan site, we were excited that we’d created social housing in the middle of Coverack. But a few people weren’t happy, despite lots of people supporting us.

I think they felt threaten as we’d lodged our own appeal, to represent ourselves and there was a chance we could have created something permanent there for posterity. That’s why they decided when we were evicted that we weren’t’ allowed to stay in our vans. Obviously we’d accumulated a lot of stuff, and a lot of stuff was broken down because we’d been there so long. But as soon as you were 18 and had finished your education they moved. They wanted to make sure we left and being quite public about it. Being branded as pure parasites by Russell Peters at the council meetings and that cascaded through the press, all that propaganda making people from out of the area have an opinion, when they didn’t know us.

We didn’t have anywhere to go to. We’d identified Traboe Cross, but they bouldered that up, our only other option. It was intense. We weren’t allowed water. There were even complaints that we’d been seen sitting in our vans drinking tea, as if we weren’t’ allowed to eat or drink while moving! Fortunately we were offered the corner of this field by Micky Tyler so we have somewhere, and he’s got planning for a site especially for us. That’s good, that’s never happened before!

That final eviction from Coverack, it felt more like a terrorist attack. I thought we might lose everything we have. This is everything we’ve got. We don’t have a council house upcountry we can bail off to, we can’t go back to Grannies, bless her, she ain’t there. We can’t go ‘back’ home and stop playing around, or whatever, this is our home, this is our lifestyle, this is our way of life and we have actively selected towards doing it.