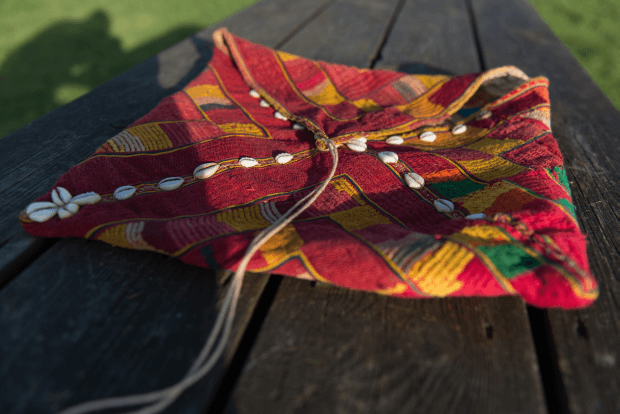 ” People are more racist towards us than they used to be. Because when I was a child we were valued for the work we did on the farm. Now there’s machinery we’re not valued for that anymore, and people think we’re dirty, liars, thieves, and we’re actually none of those things. “

Shania asks about a cloth handbag that belonged to Pat’s Granny, food and farming. Pat talks about how Gypsy life and attitudes have changed, including school, clothing, tattoos, and piercings.

Did you make these yourself? [handbag]

No, They were my grannies, but they were second hand when they were given to her. They are our version of a handbag

Do Indian Gypsies still use these?

I don’t know, I’ve never been to India.

39 seconds What food did you used to eat?

Did you used to go pea picking?

Oh yes, pea, potato, onion, hop picking … if it grew, we picked it.

1 min 8 sec How have Travellers changes in the passed years?

People are more racist towards us than they used to be. Because when I was a child we were valued for the work we did on the farm. Now there’s machinery we’re not valued for that anymore, and people think we’re dirty, liars, thieves, and we’re actually none of those things.

1min 45sec Did you used to live in a Trailer?

Yes, when I was 8. Before that I lived in a Vardo, a horse drawn caravan.

2 min What are these, on the handbag?

Shells, they come from places like India and Africa.

Do you used this yourself?

I did, but not very often as it’s very old and very fragile.

We don’t work as hard as we did then, but because we were our own bosses and came and went as we wanted, it didn’t seem hard.

2 min 56 sec Was your childhood strict?

In some respects; I was never allowed to ride a bike, and if I rode a horse it had to be side-saddle. In those days being a virgin when you got married really mattered.

3 min 30 sec What did you have to wear when you were younger?

I wasn’t allowed to show my legs any more than my ankles, I still don’t. Trousers had to be baggy. We wouldn’t have been allowed to get away with the clothes young people wear these days, especially like those on My Big Fat Gypsy Wedding.

4 min 12 sec Was it strict with tattoos and peircings?

No, the believe was that it was not safe for a girl to have a baby unless she’d had her ears pierced.

It was also tradition that once a new girl was born, the girl above would have their nose pierced. I had my nose pierced when I was two and a few months , because I was no longer just a child, I had a responsibility towards my younger sister.

In the really old days they used to pierce boys ears too. The belief was, if he died while away from home the gold in his ears could afford him a decent burial, and he wouldn’t just be left by the roadside.

5 min 12 sec What was your first tattoo?

My first tattoo, You can’t see it, but this one, basically it’s knot work.

This one I had done when I was 2 and a few months because I was very ill and nearly died. And because in those days people believed in witches and demons and things and they believed that those witches and demons made you ill. But they also believed that witches would be less likely to harm you if they had a pattern to dance round. So they put complicated tattoos on the steps of the caravan and on children’s arms if they’d been poorly, which they thought would make the witch dance round the pattern, and she would lose sight of the fact that she’d plan to make that child ill.

6min 12 sec Are you allowed to get tattooed on these days if you are 2?

I don’t think so.