Tracey talks about friendly and hostile times travelling in the UK. She found that there used to be stopping places, but now there is nowhere to park up. 20 years ago everyone was working, picking the daffodils and gladioli but now the politics is set for the Eastern European people to come here and the Travellers have been pushed out. With her husband they set up a solar stage to continue their travelling lifestyle while earning some pennies.

Tracey was moving around the country a lot, between Cornwall, Lancashire and Kent, but every time they went somewhere there was nowhere to park and people moaning at them. After the 1994 Criminal Justice Bill, they were saying to buy your own land, so she did.

When Tracey moved from a house into her bus, over 20 years ago, she found they were never short of power or water. The worse thing was always been looked at differently. The best part was the freedom.

Tracey talks about her favourite park ups, being in the countryside, with animals and places for the children to play, and also close to towns. Tracey talks about some of her pets who lived in the bus while travelling, and the time they thought they’d lost their grey cat.

Tracey talks about how difficult it was transitioning her children into different schools. How some schools were fantastic, while at one playgroup they found no-one wanted Travellers there and said burn them at the stake.

How does Cornwall compare to other places in the UK and Europe in your travelling experiences?

Cornwall is so small and people are protective over their land.

How does Cornwall compare now to 20 years ago?

Now there’s nowhere to park, there was 20 years ago. Before everyone was working, picking the daffs, gladioli, now the politics is set for the Eastern European people to come here and the Travellers have been pushed out.

So we could continue our travelling lifestyle and earn some money.

We settled in our bus. It got too difficult with 2 children. We moved between Cornwall, Lancaster, Kent, every time we went somewhere there was nowhere to park, people moaning at you. After the 1994 Criminal Justice Bill, they were saying buy your own land, so we did.

2.35 min What was the hardest transition when you moved from house to your bus, over 20 years ago?

We were never short of power or water, we were too organised for that. The worst thing was always being looked at differently.

3.18 min What was your best memory from travelling

There is loads. The forest in Lincolnshire, Thomas Pen, was ideal for you kids, countryside, town, park, friendly people, horses, geese.

4 min When did we get the animals?

When we were on the road. Remember the time we got the cats and one escaped through the gear stick. We looked everywhere then had to leave, but then I had a phone call from an old lady who had our grey cat.

5.17 min How did you find transitioning me and Ricky to other schools?

Terrible. Blackburn Longshaw, you went there ,and then went back there. It was the biggest school out of the lot and it was the friendliest. Chrones school was terrible. Sithney school was fantastic. The British Legion playgroup in Crowlas “nobody wanted Travellers there, they said burn us all at the stake”. They offered us a place before realising we were Travellers, they thought we were on the residential holiday site. Then there was St Johns in the Field, you had your photo in the newspaper making a pasty, those were the days. Nick was there in his bender, Wild-man-of-Borneo-John in his bender. We met Jason again in New Delhi, India, we’ve randomly met him again twice at festivals. 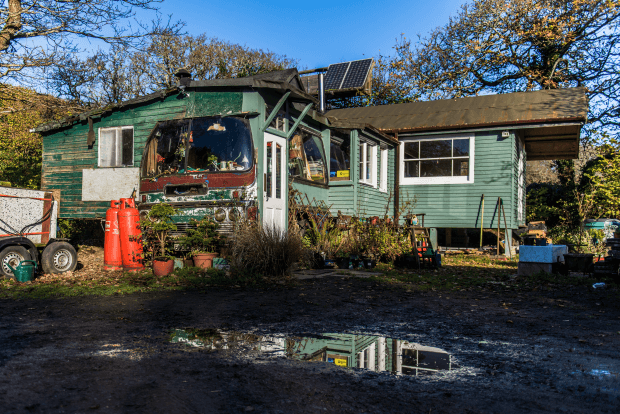